Who likes a messy code? No one. ApexSQL Refactor is a free SQL formatter add-in for SQL Server Management Studio and Visual Studio. It has been very popular among database developers with over 200 customizable options for formatting SQL code. ApexSQL decided to take it up a notch and make an online version of the popular add-in. It’s called Online SQL formatter and it is available for anyone who has access to the internet at the Online SQL formatter.

Let’s go back in time and mention a few interesting facts:

When customers run into an issue with our product, they contact our tech support team. We like to think of our support staff as the best in the industry. This is not just because we are frequently told so. One of the primary reasons is because we are all ears when it comes to user experience and feedback in general. We listen to our users and over the years we’ve crossed paths with some of the users who due to specific environments, company policies, security policies, Windows user roles, etc. are not able to use ApexSQL Refactor on their machines.

Well, that’s okay. Not all the requirements can be met always. So, we started a new project and said let’s make SQL formatter available for everyone at all time. We put a team together behind this idea and soon enough started pushing toward realization. The actual manufacturing process that puts all the pieces together to create the final product took about two months.

There’s a catch though. You need an active internet connection. But wait. Today, everybody has the internet. That’s right and all you have to do is to open your favorite web browser, enter the “https://sql-formatter.online/” in the address bar, and hit Enter. For those who have been using the desktop version, you’ll notice the similarity to its origins (Options dialog): 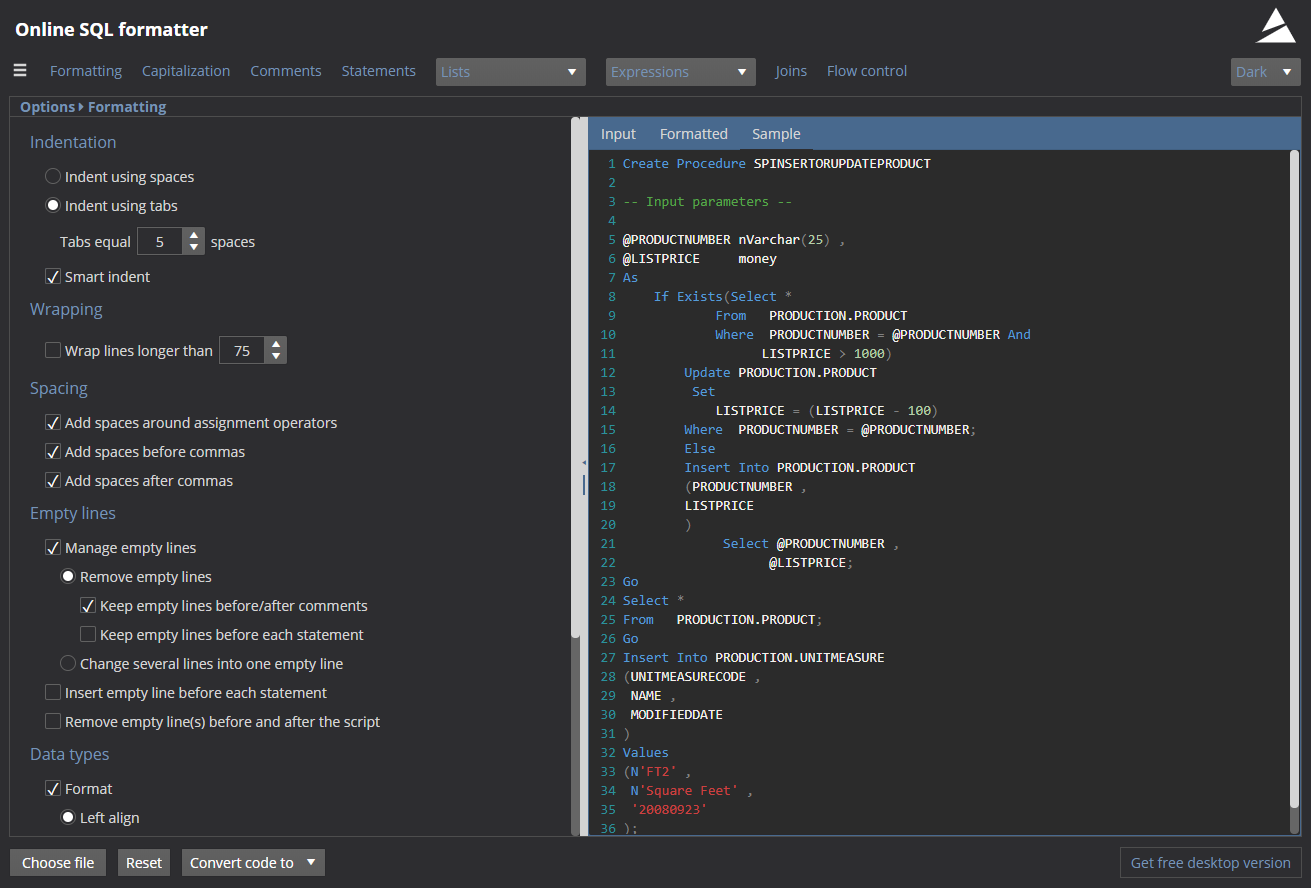 From here, you can start formatting SQL code by doing either of the following:

Once the Input has data in it, you can switch over to the Formatted tab in which all the changes applied through the advanced formatting options on the left will be shown instantly. If you get stuck with an option, don’t know what it does, etc. you can always switch over to the Sample tab and preview what the option actually does on a sample code.

If you haven’t noticed, the user interface is preset to the favorable dark theme. We joined the dark force a long time ago with all ApexSQL tools/add-ins. Read more at the following link: Visual themes in ApexSQL tools.

However, if you are not a fan, you can change UI to the light theme at the upper right corner from the drop-down menu: