The ApexSQL Diff Developer version will be a lite version of the tool, tailored to meet the demands of the users who do not need the full set of features which will be available in ApexSQL Diff Professional

The most prominent features that will be available only in ApexSQL Diff Professional are: 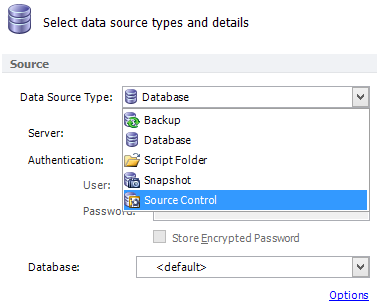 Let us take a quick look at each feature

This feature allows to compare and synchronize supported data source directly to a native or natively compressed backup file, as well to perform object level schema recovery without the need for a full backup restore. ApexSQL Diff Professional engine will only the part of the backup file containing schema information, which is in general only small part of the file itself; in turn resulting in fast comparisons and object recoveries even from backups measuring tens or hundreds of gigabytes

This feature provides the ability to compare and synchronize file system folders containing SQL objects’ scripts. In other words, it allows updating the SQL scripts to match the live objects or quickly deploying the object’s scripts to a live database

This feature significantly simplifies integrating SQL databases with version control. It provides a quick way to get even the largest databases containing tens of thousands of objects with, what is essentially, a single check-in. On the other hand, it allows risk-free deployments of a new database build directly from source control, as ApexSQL Diff Professional will ensure that the no dependency will be left behind and that the updates will be executed in the proper dependency order. In addition, it allows synchronizing live objects with a specific revision of their versioned scripts

The CLI allows complete automation of the comparison and synchronization process. Promoting changes from the development, to the test, integration and even production environments can be scheduled and performed error-free completely unattended

Augmenting the deployment script with pre or post synchronization scripts

The full list of features for ApexSQL Diff Developer and ApexSQL Diff Professional as well as their differences are listed below: 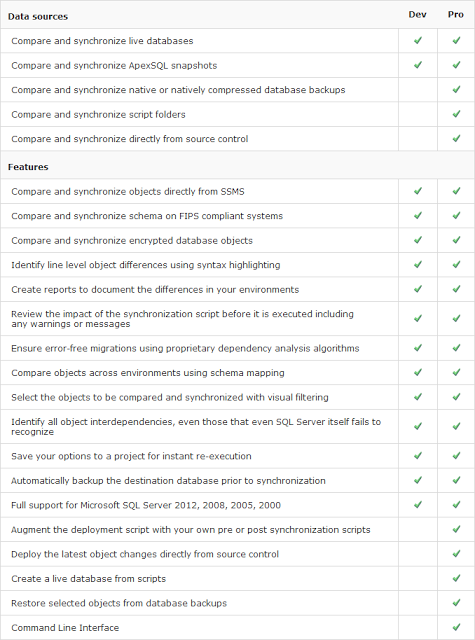 All existing customers have an ApexSQL Diff Pro license