Although we think ApexSQL Source Control is a great start, we want to make a ton of improvements over the next few months. Our basic approach is to allow the user to choose a development model (dedicated or shared) that suits him best and then ApexSQL Source Control integration into SSMS will be customized based on that choice. We are going to add support for new systems as well as improve existing engines. We will put a lot of effort into improving design and usability. Once we complete work on the dedicated development model, we‘ll concentrate on the shared database development model and anything that is currently missing in ApexSQL Source Control support for it, so that at the end we have a tool that can fulfill all the needs of a team, small or large, who’s everyday tasks revolve around database development and versioning. For more specifics, please read on…

We are not trying to say that the shared development model is a bad one – it just cannot cope with the reality of developing a database in a team that is bigger than 2-3 people. Imagine a situation in which 10 developers make changes to a single database concurrently. If the communication between them is not perfect, there is a big chance that something will go wrong soon. To put it simple – You cannot test and play with your designs in a shared development model environment, as all your changes immediately affect everybody else.

With a dedicated development model there is no more need for tapping your colleague on the shoulder and asking him if he is working on an object that is dependent on an object that you want to work on. You just start you work and run comparison at the end to see what has changed in the meantime. You are provided with complete information about changes being made and you can take proper merge actions in order to apply your changes to the master repository. One more thing, you do not even need an internet connection to work, as you can commit your changes later without fear that something is broken or overwritten.

How is it going to work in ApexSQL Source Control?

This process is repeated each time when the user wants to synchronize his changes with the remote repository. Scripts from source control are compared with the local database scripts and changes are presented to the user in the Action center, so that he can take appropriate action. The user will be able to control if a specific change should be taken from remote or committed from local database, and he will be able to merge the conflicting changes with built-in or one of the most popular third-party comparison tools. The user will be provided with the option to undo the changes made to the database, on individual objects or the whole database, by reverting to a latest version from Source control, or any of the previous ones. On the next picture, you can see how the Action center tab shows differences between local and remote objects: 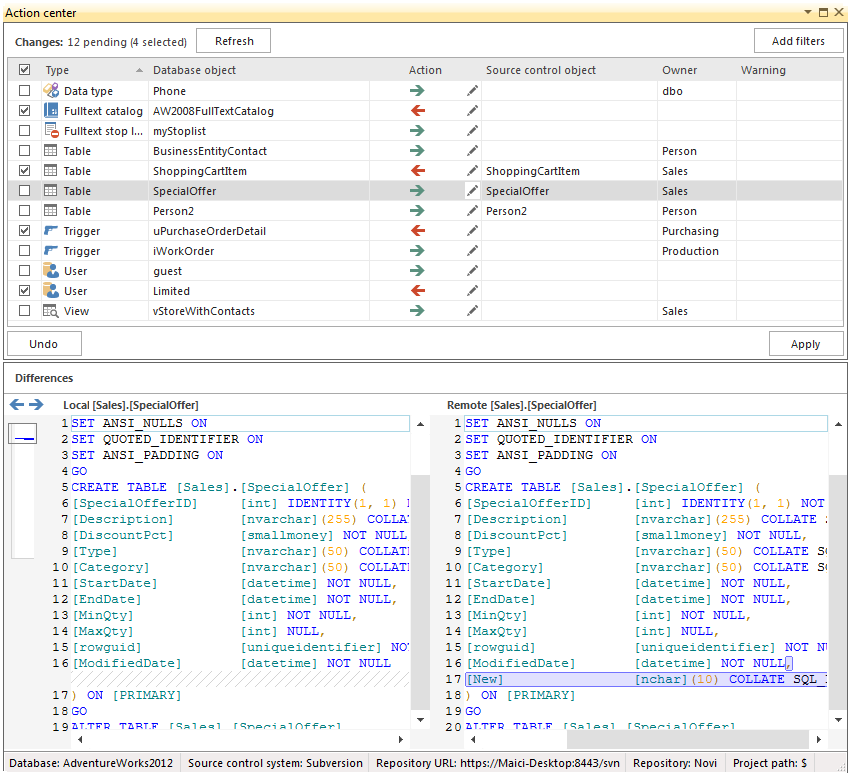 One more important thing that we are introducing in the next release of ApexSQL Source Control is the complete integration with SSMS. This means that changes to the database will be monitored in real – time and that every change made will be automatically marked in the object explorer. Just by taking a look at the OE, a developer will be able to tell what objects are different from the last version in the Source control.

As we said previously, in ApexSQL Source Control 2015 R1 user will be able to see the differences between the objects immediately and to resolve conflicts by taking appropriate action.

Another picture of the Action center tab, this time when conflict appears: 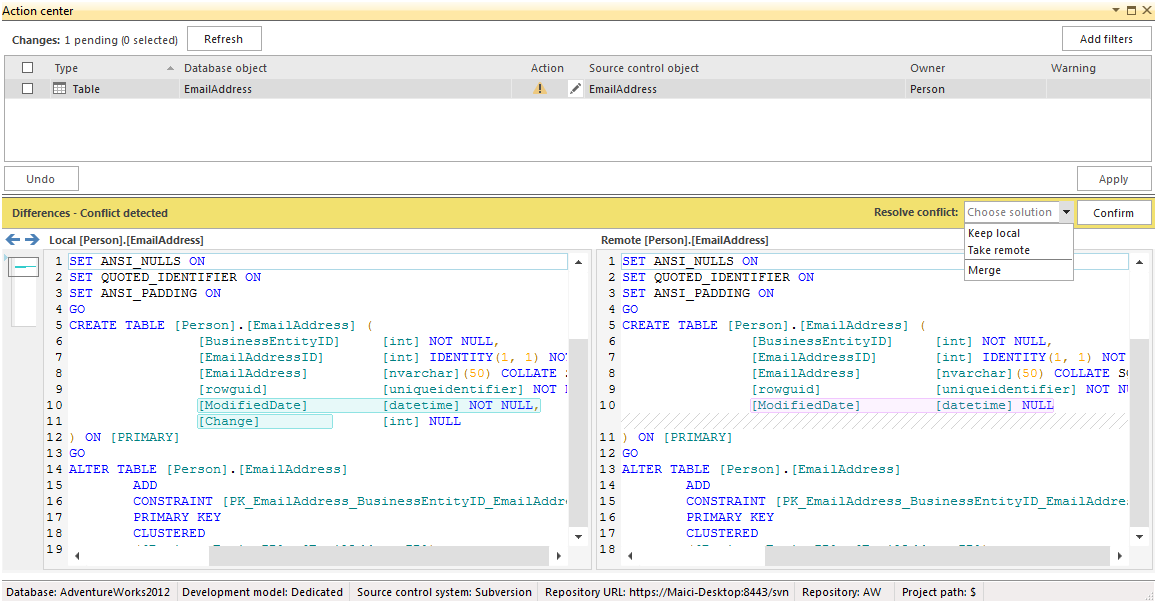 What we are hoping to achieve here is that a database developer can be completely independent in his work, while still having a possibility to monitor his, and changes from others made in the meantime. This will provide him with a full control of the development process and provide a new level of transparency in team development.

What about the shared database development model?

We are committed to cover all relevant source control system and we have already implemented support for Git, Mercurial and Visual Studio Online while we are in the process of implementing Perforce. Our implementation for Subversion has been rewritten against newest SharpSVN libraries in order to boost performance and use features provided by them. One more interesting thing is going to be the functionality to map database to a local working folder, which can then be used as the repository for any third party Source control client (GitHub, TortoiseSVN…).

Beta version of ApexSQL Source Control 2015 R1 has been released in October 2014 and it contains the following functionalities:

Main version of ApexSQL Source Control 2015 R1 has been released on November 3, 2014 and it contains the following functionalities:

Please note that we have planned rapid release cycles after the beta version is out, so that we can respond to feedback and improvements proposed by users and beta testers. We are, as always, more than willing to work with the community in creating the best tool possible for the database versioning, so anyone interested can contact us at: satori@apexsql.com in order to provide their ideas and feedback or try the beta version. For this first planned release, ApexSQL Source Control 2015 R1, experiences and advice from anybody who is working in the dedicated development model environment and with the strong persuasion about the need for database versioning would be treated as pure gold.